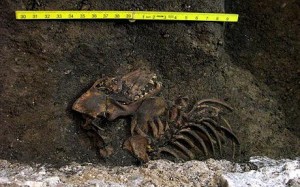 Archaeologists have found the remains of a dog under Cambridge University dating from the 11th century.

The remains were pictured yesterday in the Telegraph as experts declared the discovery shows Cambridge was the site of an Anglo-Saxon community. The bones are believed to be from before the Norman Conquest that followed the 1066 Battle of Hastings, although further tests are needed.

The bones were found beneath a staff tearoom at the University and the Site Director of the Cambridge Archaeological Unit, Richard Newman, commented:

“The dig has enabled us to prove what we previously had no proof for – that, by the time of the Norman Conquest, there was a thriving settlement in the middle of Cambridge. What it has shown is that, a century and a half before the university arrived and 300 years before it started to build in this area, people were already living and working here. The boundaries marking where their homes begin and end do not change for several centuries, until the university moved in.”

Of the dog, Mr Newman said:

“It would have been a working animal and an essential part of the household at the time, used for tasks such as catching rabbits. A dog would also have given people security – it was useful when it came to protecting your possessions, and it was cheaper than a lock!”

Other materials found included pottery pieces, presumably made by the Romans who founded Cambridge.