A survey by high street retailer Wilkinson has found that UK dog owners would rather holiday in the British Isles with their pet than travel abroad without.

Millions of Brits were quizzed for the survey, and it yielded some surprising results.

It seems that galloping inflation and a weak pound isn’t the only thing putting us off holidaying abroad. More than a million pet owners said that they would rather take a break in the UK, or even have a ‘staycation’ – in other words, a holiday at home – with their pet than travel to sunnier, more exotic climes without it. The UK’s reputation as a nation of animal lovers was also upheld, as a further million people confessed to blubbering like babies when leaving their dog or cat behind. 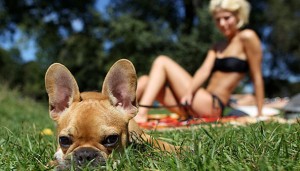 It is estimated that half of all UK households own a pet, and for those determined to take their dog or cat abroad with them, it seems that the current economic climate is no barrier to it. A quarter of all pet owning adults in Britain would be prepared to stump up the same amount of money to them their charges with them as it would cost to take another adult.

It’s not just the grown-ups who are prepared to make sacrifices either – 25 per cent of all children surveyed would be prepared to forego their pocket money, sweets and even games consoles if it meant that their pet could travel with them.

Linda, Wilkinson’s in-house pet expert, offered her advice to those travelling anywhere with their cat or dog. She said:

“A growing trend is pet-friendly hotels and attractions. Make sure your pet is healthy enough to travel and consider how they respond to spending time in a car or a train as some animals can find this very stressful.”

“Many animals can also find the change in routine and environment very stressful so carefully consider whether taking your pet on holiday with you is the best option.”

For holidaymakers who opt to leave their pet at home, she recommends that your sitter knows your pet’s routine, including exercise and medication, inside out. If boarding your pet, travel to kennels or cattery to ensure the facilities are up to standard, and that the animals there seem happy.