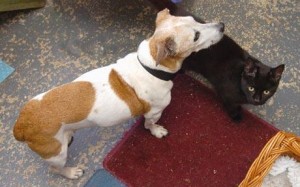 Chippy is a Jack Russell that appears to have had an identity crisis having spent his entire life around 40 cats.  The Cats Protection League is treating him as an honorary feline and is seeking a home for him.

The charity in Stroud, Gloucestershire, says that Chippy sleeps next to his best friend, Annie a black female cat and even uses a litter tray.  He rarely barks, and the charity believes he thinks he’s a cat!

Liz Dart, who is fostering Chippy in Nailsworth, said: “He came to us as part of a rescue from a multi-cat household in Cirencester.  At first we were told he was 19, blind and deaf but that wasn’t the case.  We couldn’t leave Chippy behind because he had lived with cats all his life. I suppose, having always lived among them he just doesn’t know any different. He never learned how to be a dog.

“He goes to bed with Annie, one of the other cats, as they are very close and ideally we would home them together. She’s very protective of him.  He didn’t really bark and still uses a litter tray now. He has chewed up a toy mouse – whether he was responding to cat nip on it, I don’t know. He eats dog food now – goodness knows what he ate before.”

Local vets think Chippy is around 14 years old.  He’s an old, gentle dog according to Miss Dart and although he doesn’t mind children, he would probably suit a quieter home now due to his age.