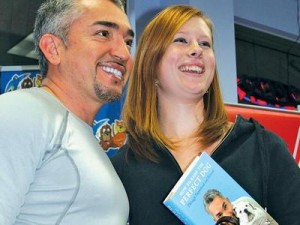 Cesar Millan, the Dog Whisperer, paid a visit to a pet store in Canada on Thursday this week as part of his whistle stop (or whistle dog) tour of Canada. The tour is called the Live 2010 Canada Tour, and on Thursday last week Cesar stopped by ‘Bosley’s Pet Supply’ in Richmond to meet fans of both the two and four legged variety.

Fans of Cesar’s queued up all morning, lining around Terra Nova Square, waiting for their idle to show up. One fan, Catherine Richter, was quoted as telling the Canadian Metro:

“We wanted to be first in line to see Cesar. I’m a dog trainer myself, so he’s my idol. It’s amazing what he can do for dogs.”

Catherine waited for Cesar from 6:30 in the morning, and she has found Cesar’s dog training techniques to be extremely useful in her work.

When Cesar did arrive his entrance was more akin to that of a rock star than a dog trainer, standing up through the sunroof of his car and waving at his cheering (and barking) fans.

“The tour’s been fantastic. Every show is just better and better. Our West Coast fans are warm, wonderful people.”