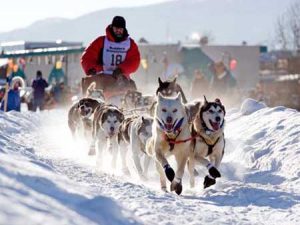 Mushers from far afield as New Zealand, Jamaica and Scotland gathered to take part in the gruelling event, and more than 60 drivers and over 900 dogs were sent on their way by hundreds of spectators as they set off in two minute intervals.

The Iditarod is in its 39th year, and started off as a test of skill and endurance for dogs and mushers alike, but soon developed into the highly competitive race it is today. After a ceremonial start to the race in Anchorage, the race proper begins in Willow, running along the Alaska Range and along the shores of the Bering Sea before finishing in Nome, Western Alaska. As well as the challenging terrain, sled teams will brave temperatures plunging into minus figures, with wind chill causing them to reach -100 °F.

Mark Nordman, a race marshall, has predicted a fast race – one even to challenge the current record of 8 days, 22 hours, 47 minutes, and 2 seconds. He commented:

“The trail looks wonderful. We just got a report from our trailbreakers in Rainy Pass. They were in Finger Lake last night and there were some trees down over the trail, 17 or 18 of them. They got all those cut out. Otherwise, it’s a very hard and fast trail up through Puntilla.”

However, Nordman cautions that conditions can change quickly:

“I think that once we get out toward Ophir and head over to Iditarod then to Shageluk, there’s a lot of snow. You get off the main trail and you are up to your neck.”

“I think that’s where the race will become more of a working dogs race.”

It will be a few days yet before the teams of huskies will have earned some dog treats and nice, warm dog bed, so Dream Dogs will keep a close eye on the results.