Puppy love for Beckham during lockdown 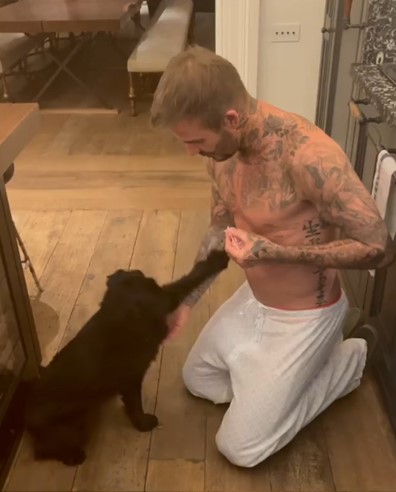 Former professional footballer David Beckham recently made headlines by appearing shirtless in a video posted on Instagram, which featured his pet dog Fig. The black Cocker Spaniel is one of four dogs owned by the Beckhams, with the other pups, Olive and Sage, sharing the household with the family’s guard dog, a German Shepherd named Logan.

The multi-millionaire celebrity and his wife Victoria, a former member of the 90s British pop sensation girl band the Spice Girls, have spent lockdown in their home in the Cotswolds, along with three of their four children. Beckham in particular has been nicknamed “the dog whisperer” by his wife thanks to his Instagram videos demonstrating his techniques at dog training.

The latest video to catch the public’s attention features the ex-footballer teaching Fig how to give a high five, earning herself treats in the process. Fig has been a member of the Beckham family since October 2018, and it’s not the first time that Beckham has vlogged about this furry companion in particular. In May, a previous video showed Fig learning how to give a paw, and being rewarded with tasty biscuits and kisses.

Fans of the glamorous family were impressed with both Beckham’s training skills and his physique, as he showed off his tattoos and muscular chest. Fig the dog also received an outpouring of supportive comments, as the viewers were quick to show their affection for the smart pooch.

The number of video views quickly reached three million, and his fans are hoping for more adorable dog training videos from Beckham in the future.

A dog owner since the early 80s, after convincing his parents to buy a Yorkshire terrier named Sadie, Darren created Dream Dogs so dog owners could find the best dog related information on the Internet.