The World’s Ugliest Dog competition was held last weekend at the Sonoma-Marin Fair in Northern California where a boxer-mix was awarded the title.

Pictured here is Pabst, a four year old boxer-mix breed with a very prominent under-bite.  Pabst was a rescue dog taken in by his owner Miles Egstad.

The prize awarded for being crowned the world’s ugliest dog was $1,600 (£1,000) prize money, some pet suppliers and a dog modelling contract from House of Dog. 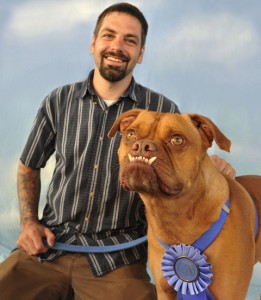 Egstad looked very proud of his dog – although we imagine he doesn’t agree with the ‘dogs look like their owners theory’.