Top 5 singers who have dogs

Continuing our week long list of lists, today we turn the spotlight on singers.

It’s funny old life being a rock star or a member of a band. When you’re not holed up in a studio, recording your 152nd take on a backing vocal because you still can’t get it right, filming a reality TV series about your dysfunctional kerr-azy family or twitching in a gutter outside a nightclub after overdoing the Columbian marching powder, you’re more than likely you’re on tour, spending months away from your home and family.

This hardly seems like the behaviour of a conscientious dog owner. We all know that your pet needs love and attention, not to mention feeding, watering and exercise. Luckily for the average rock multi millionaire, he’ll have hired help on hand to assist with the day to day care of his pet, whether it’s an elderly English retainer or a young Filipino manservant. This leaves you free to pose with your pooch for photographs for Hello’s exclusive 8 page spread of your brand new Hampshire mansion.

Of course, this is a sweeping generalisation. In a profession where image is everything, sycophancy abounds, teen idols have a shelf life measurable in weeks and talented people never seem to get the success you think they deserve; the unquestioning loyalty and friendship that your dog will give you can be beyond compare. Let’s have a gander at some of the more famous warblers who have a pet dog. 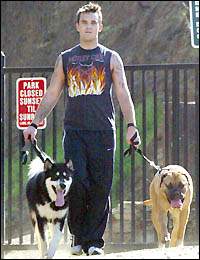 Not long back in the UK after his American UFO hunting jaunt, the one time Take That bad boy and now new Take That bad boy owns several dogs. Due to quarantine laws, he had to leave his pets in Los Angeles for six months when he moved back to Blighty, but this didn’t stop him from spending time with his Labrador/Pitbull cross, German Shepherd, Bull Mastiff, Rottweiler and a wolf called Sid. He shelled out £4,000 per month on first class, 11 hour flights to see his pets. The dogs were eventually allowed into the UK as they were free of rabies, but the jury is still out on Robbie.

The girl band is famous for loving dogs, and went to the aid of the Dogs Trust as part of Nintendo’s puppy simulator Nintendogs. Band member Sarah Harding is so attached to Corker, her French bulldog, that she asked the rest of the group if she could have a dog crèche on tour as she couldn’t bear to be apart from him.

The rocker who, with breathtaking modesty, named his band after himself, is consistently named as one of the world’s most beautiful people. Once the epitome of American stadium rock, he single-handedly propped up the global hairspray industry during the Eighties. However, beneath the twinkly-eyed, double-denimed cowboy image beats the heart of a big softy; his Rottweiler/Shepherd cross Copper was rescued from the dog pound after Bon Jovi couldn’t bear to see him locked up.

The Canadian singer, whose real name is Eileen Edwards, loves dogs so much she even married a guy called ‘Mutt’. She currently owns two brown Newfoundlands called Coal and Mocha. A devout vegetarian, she has been reported not to feed her dogs meat, and her previously pet Tim, a German Shepherd, even had his own dog flap on her tour bus!

The mental Brummie singer, who once cocked his leg on the Alamo war memorial whilst wearing his wife’s dress, has an amazing 18 pet dogs. His talent show judge wife Sharon is rarely seen without her Pomeranian Minnie, and Ozzy’s bulldog stole the show on his reality show by pooping wherever and whenever it could. In 2009, Ozzy’s Pomeranian Little Bit was taken by a coyote whilst the family watched the Michael Jackson memorial show. So far, Ozzy has restrained himself from biting the heads off any of his pets.